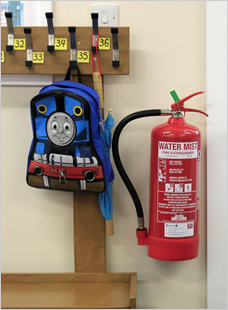 Qwackers Pre-School in Alford, Lincolnshire has been part of the life of generations of local people. It started off in a hall at the side of a babbling brook where ducks swam. The group then moved to a second-hand prefab building that was erected on the site of the John Spendluffe School.

This building has served a good purpose but with many years of wear and tear it became apparent that it was no longer viable to repair the structure any longer. After several years of campaigning Qwackers have now moved into a brand new building on their old site.

We always like to support local causes and as Qwackers is a registered charity we wanted to show our support by installing new extinguishers for them and maintaining the extinguishers on a yearly basis in the future completely free of charge.

Water Mist extinguishers are also perfect for home, offices, shops and kitchens, and their testing credentials mean they can even be used on electrical equipment too!