Several years ago, Safelincs began working with the Child Accident Prevention Trust (CAPT), a charity committed to reducing the number of children and young people killed, disabled or seriously injured in accidents. Given the nature of our business, we felt that this was a very appropriate organisation to work with.
CAPT wanted to raise awareness of the dangers from carbon monoxide (CO) and worked with us to set up a page on its website selling CO alarms sourced through Safelincs.
In addition two of the CO alarms from the range sold on Safelincs’ own website include in the price a donation of £1 to CAPT. Every quarter Safelincs writes a cheque to CAPT based on sales; the most recent donation of £585 being the largest yet.

Harry Dewick-Eisele, managing director, Safelincs, commented: “We have seen a steady rise in the sales of CO alarms over recent months. This may be as a consequence of some of the tragic accidents involving carbon monoxide that have gained national attention – notably the recent court case surrounding the heartbreaking case of two children who died of poisoning whilst on holiday in Corfu. ”

“CAPT does a great job raising awareness of potential hazards for children and young people. We are very pleased to be able to support this charity whilst simultaneously increasing the coverage of carbon monoxide protection.” 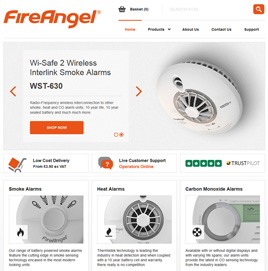 Safelincs has launched a website dedicated to the sale of FireAngel fire and carbon monoxide detection products; this follows the signing of a two year contract between Safelincs and Sprue Safety Products, the company behind FireAngel, in July 2015. Sprue and their FireAngel alarms have long been on the forefront of design and technology, a fact which is recognised by a large number of fire services which install and recommend FireAngel products. Included in the range is a selection of high tech smoke alarms, applying technologies such as Thermoptek and Thermistek fire detection, which cut down the number of false alarms from smoke and heat detectors. FireAngel also offers a large number of carbon monoxide detectors, including sealed ten year CO alarms, offering total peace of mind.

As part of the contract Safelincs will also promote and sell First Alert, BRK and FireEye smoke and CO alarms, all part of Sprue’s significant alarm portfolio.

Safelincs’ Managing Director, Harry Dewick-Eisele, commented: ‘I am very pleased to be working together with the UK’s most advanced smoke and CO alarm developers. Sprue’s products bring together customer focus and functionality expressed in beautiful design combined with technology which pushes the edges of protection equipment further. Together, we should be able to increase both Sprue’s and Safelincs’ market share to even higher levels.’

The Disability Discrimination Act (DDA) 1995 recognises the importance to ensure all occupants, including occupants with disabilities, have reasonable access throughout a building, and places duties on all those that provide services to the public to make changes for disabled access where needed. These adjustments need to ensure that no person is at a disadvantage and requires the responsible person to provide a means of escape for everyone, including those with a disability.

Once you have chosen an evacuation chair as part of your escape route plan, do you need to provide training for your employees? According to the Provision and Use of Work Equipment Regulations (PUWER) 1998, equipment provided for use at work needs to be “used only by people who have received adequate information, instruction and training.” This means that the employer, building owner, or the responsible person is to ensure all appointed employees (those responsible to use equipment in an emergency) receive adequate training as to the correct use of the equipment. By simply installing evacuation equipment alone you have not necessarily satisfied your requirements as the responsible person.

Should you have to renew your fire risk assessment, checks will normally be carried out as to whether training has been given for all the fire safety equipment located in the workplace. If an evacuation chair has been installed but no training has been provided for your employees, this would be seen as a  non-compliance and risk by the assessor.

Freshers’ week is an exciting time for new university students, however, for parents whose son or daughter has just left home it can be a different story altogether. You have been looking after and protecting your child for the past 18 years and giving up this roll can be hard. It can be easier to take a step back if you know that they have all the information they need to be able to make informed decisions at university. Providing them with vital health and safety information is pivotal to this.

Each year there are 50 preventable deaths from carbon monoxide, which is known as the silent killer. CO has no smell, colour or taste, making it impossible to detect with the human senses. How then, can you protect your fresher?

Fire crews were called out in October 2014 to a student house in Reading. The students living in the house were showing flu-like symptoms and felt very drowsy. Their carbon monoxide alarm alerted them to the presence of CO and they were lucky to escape unharmed. A leak of CO was discovered and had it not been for the CO alarm signalling the danger, the outcome could have been disastrous.

Make sure a portable CO detector is on your list of university essentials.

Over 7000 emergencies attended by the fire brigade during 2013/14 were classified as chimney fires in the annual fire statistics report. Poor chimney maintenance is a known cause of domestic fires, most chimney fires are preventable.

Chimney Fire Safety Week 2015 takes place from the 7th until the 13th of September this year. The event is intended to highlight the causes of chimney fires and emphasise how to prevent a chimney fire from occurring in the first place. The most common causes of chimney fires are inappropriately sized or poorly installed appliances, blocked chimneys from soot or bird nests and the burning of unseasoned or wet wood.

Infrequent sweeping of your chimney significantly increases the risk of a fire, and the consequences can be devastating and costly. Even a successfully extinguished chimney fire creates a great deal of mess and is a traumatic experience.

Whilst having your chimney swept regularly will greatly reduce the risk of fire, it is still important to have a means of alerting your family in case fire strikes. Chimney fires are often reported as creating a disconcerting low rumbling noise accompanied by cracking and popping from within the chimney. If you are awake, these signs are often enough to alert you to the problem, but if you are asleep, your family are much more vulnerable.

An interconnected system of smoke alarms will quickly detect any smoke released as a result of the chimney fire and raise the alarm across your entire household. Speed of detection is key, as a swift escape and notification of the fire brigade will greatly reduce the danger to your family and damage to your property.

A house fire as a consequence of a poorly maintained chimney is a terrible thought, and should be enough to motivate anyone to take steps to protect their home from the risk. Having your chimney swept regularly, ensuring your smoke alarm system is in good order, and installing a carbon monoxide detector will ensure that you are giving your family the best possible chance of avoiding the dangers and trauma of a chimney fire.

For further information contact our customer support team via support@safelincs.co.uk