Residents at the Westwood Care Home have given the Agrippa free-swing fire door closers their approval, as they provide the option to have their fire doors partially open leaving them feeling less shut off from the rest of the home, whilst retaining some privacy. The Agrippa door closer allows a fire door to be used just like a normal door without the resistance usually associated with fire door closers. However, the moment the closer ‘hears’ a fire alarm, it changes its operating mode and turns into a traditional door closer, closing the fire door to stop the spread of fire and smoke.

Based in an Edwardian Town House in Chorley, Westwood Residential Care Home has chosen to have the wire-free fire door closers installed onto resident’s doors.

Stephanie Crane, Director at Westwood said: “We were searching for an alternative solution to our existing door holders as they were damaging the carpets in the home. The residents at the care home needed a solution to make their doors light and easy to move, whilst closing in the event of a fire.”

Westwood offers a personalised 24-hour quality care service for up to twenty people over the age of 65, delivered by a highly-trained and well experienced team of staff.

The Agrippa fire door closer is a battery powered device providing a safe and legal solution to holding open and closing fire doors. The door closer is discreetly installed at the top of the fire door providing restriction-free movement to make the door light and easy to move.

The closer complies with the Building Regulations Approved Document M Section 3.10 Parts K & L, which state that fire doors should self-close when activated by the fire alarm, when the power supply fails or by a hand-operated switch.

The closer is part of the Agrippa suite of products, which also includes an acoustically triggered fire door holder and pillow fire alarm. 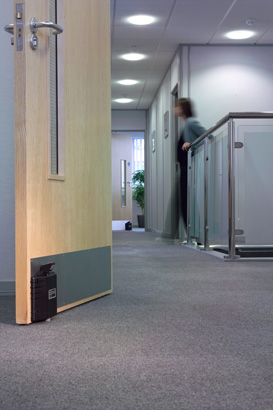 Businesses, schools, hospitals and restaurants all have something in common – how to meet the needs of customers and staff while staying compliant with fire safety regulations. Cumbersome heavy fire doors fitted with a door closer ensure the safety of occupants and prevent the spread of fire but they cause issues for those moving from one area to another, especially when carrying heavy objects or for someone with impaired mobility.

Portland Youth Christian Outreach (PYCO), a small charitable organisation working with young people on the Isle of Portland, Dorset carried out their fire risk assessment and found that staff were wedging fire doors open to enable easy movement for staff and users and to enable staff to monitor activity in rooms. These wedges rendered the fire doors inoperative and could have led to serious prosecution for breach of fire safety related laws. Operations Manager at the centre, Zach  Williams said “Fire doors were often left wedged open as this was the only way that users could freely move around the centre and that staff could easily monitor what was happening in other rooms.”

The two main aims for the centre were to adhere to fire safety regulations and to maintain the free movement and monitoring possibility within the centre. It was identified that the Dorgard, a wireless fire door holder that is fitted to the bottom of your fire door would achieve these requirements. The Dorgard permanently holds fire doors open in the desired position. It then listens for the sound of a fire alarm and, on hearing it, lifts the plunger and allows the door closer to close the fire door. This prevents the spread of fire and smoke and gives protection to people within the building. Zach commented that “Fire doors make a real difference in protecting property, so these devices have made a great improvement to the safety of our building and all users. It allows both staff and volunteers to move around the centre with ease, without placing anyone, or the property at risk.”

Dorgard  is easily installed within 5 five minutes and, as it is battery operated, can be installed by almost anyone. This cost effective device helps with the flow of air within a building too, especially in the hot summer months.

Please view the Dorgard for more information or call 0800 612 6537. Watch this video to see how easy Dorgard is to install. 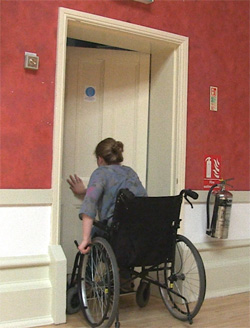 After the recent BBC investigation about London care homes not meeting fire safety regulations there has been an important court ruling that will hopefully change the behavior of care home owners and increase the safety of the residents.

The issue  regarding resident bedroom doors, which must be fitted with self closing fire doors, and the risk of these fire doors being wedged open in an illegal manner was addressed. Fire doors are generally heavy and when fitted with a self closing device very hard for an elderly person to open. In the case of care homes fitting bedroom doors with these devices will restrict the mobility and independence of residents. The fear was that care home owners will then wedge the doors open to allow residents to freely move in and out of their bedrooms. This practice is illegal and the judicial ruling now stipulates that self-closing fire doors must be fitted with a device that will hold the door open and which releases the door when a fire alarm is triggered, allowing the fire door to be closed with the door closer to prevent the spread of fire.

This is ruling is paramount in ensuring the safety of vulnerable

residents. The solution to this new ruling need not result in having a new system wired into the premises but can be resolved with wireless devices such as Dorgard or Freedor. Both devices are wireless and can be fitted retrospectively to fire doors without the need of an electrician.

Both fire door retainers have a night time closing feature and have adjustable  sensitivity. As the Dorgard and Freedor are both wireless products they can be fitted by a handy man rather than a costly electrician. The Dorgard has a 5 year warranty, which is only available from Safelincs Ltd.

More information about the judicial ruling can be found at http://www.cpbsonline.eu/pressrelease/pressrelease.aspx?companyname=Fireco&title=Court+Makes+Important+Care+Home+Fire+Safety+Ruling Designed for holding fire doors open legally, the Dorgard Fire Door Holder allows a fire door that is fitted with a closer to be held open, but also ensure that it closes in the event of the fire alarm sounding – as is required by law. The Dorgard is constantly listening out for the sound of the fire alarm and shall release its hold on the door when the fire alarms sounds. This allows the closer to function correctly and ensure the fire door provides compartmentation of the building. Holding doors open during the summer months is particularly important as offices can often get hot and stuffy.

Occasionally, customers ask for more details with regards to the installation of Dorgard. To aid with installations, setting and maintenance, we have now launched a new sub-portal dedicated to Dorgard Fire Door Holders, as well as creating a number of video tutorials to assist with the installation process.

We are always available to answer customer calls and questions by telephone, email or online chat. Safelincs Ltd always want to give their customers the best value possible. This is achieved by sourcing high quality products and offering customers a service that exceeds our competitors.

The Dorgard is no exception to this. We are now offering the Dorgard with a FIVE year warranty, compared to industry standard of only one year.  This coupled with our free shipping on all Dorgard orders shows our commitment to offering a service above and beyond expectation.

For more information on Dorgards, please follow this link: