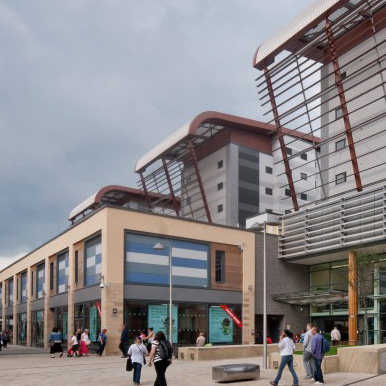 Northumbria University, home to over 35,000 students, has rapidly expanded over the last few years. Trinity Square student accommodation, part of the university completed in 2014, has been one of the largest building projects outside of London. Trinity Square can house over 1,000 students and offers a choice of studio apartments and accessible bedrooms.
This complex has over 300,000 square foot requiring over 4 800 emergency and standard lights throughout the building. The emergency lights were required to illuminate exit routes and comply with BS5266-1 : 2011. As energy efficiency and sustainability were major considerations, all lighting systems had to adhere to strict efficiency specifications while remaining within a clearly defined budget.

Round slimline emergency lights XL and models of the same with LED were installed in bedrooms, staircases and corridors throughout the complex.
The units were supplied with a purpose made tray designed specifically for the Trinity Square lighting system. The bedroom lighting had to fulfil comfort and diffusion standards to CIBSE recommendations. The lighting units were therefore fitted with special diffusers to improve light transmission and to ensure wellbeing.  Despite using 26W lights instead of the standard 28W in the non-LED lights, the light transmission was increased by 54% compared to standard lights with standard opal diffusers.  Well balanced light significantly improves concentration and reduces fatigue.

When comparing power consumption of emergency lighting, and more specifically comparing LED lighting with standard lighting, it is important to understand some of the terms used and what they actually mean in this context. Sometimes you will see the power consumption documented in W (Watts) and sometimes it will be stated in VA (VoltAmperes). Whilst this looks confusing, it is comforting that both terms are actually identical. Multiplying the Voltage (V) of the electrical supply with the Amperage (A), which represents the current flowing through the light, gives you VA (VoltAmperes) which represents power consumption and is actually the same as the ‘Wattage’ (W). So VA equals W; they are just different ways of saying the same thing.

For this blog we will be comparing a CS8 maintained emergency bulkhead with an X-GSA LED maintained emergency bulkhead as they are very similar units, although they have a very different power consumption (also the CS8 produces light output of  100 lumens, whilst the X-GSA produces a slightly lower 85 lumens. This difference, though, is negligible.).

It is also important to know that LED emergency lights last substantially longer than fluorescent tubes. An LED bulb will last over 5 times longer than a traditional fluorescent light.

Generally speaking LED emergency lighting is more expensive than the traditional equivalent, but when you factor in the substantially lower power consumption and the lower maintenance needs of LED lights, they are actually more cost effective in the long term.