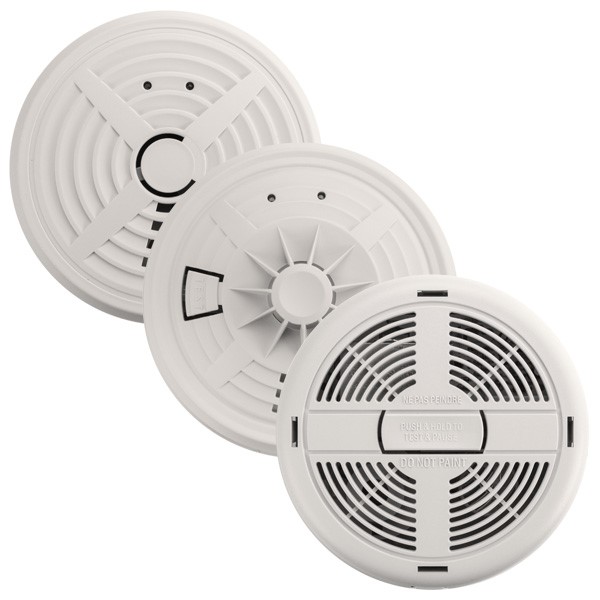 All smoke alarms, whether mains powered or battery powered, have a finite lifespan. They can only continue to function at optimum levels for so long. If your smoke alarms are older than 10 years you must replace them as soon as you can to remain protected. The mains powered alarms in the 600 series and 700 series from BRK have now been discontinued following the manufacturer’s decision to withdraw from the European market.

These alarms were very popular for many reasons but prime among these was the ability to replace older alarm heads with units from newer ranges without the need to replace the base. The new alarm would fit directly onto the existing base, removing the need for an electrician and allowing the user to perform the replacement with only a few simple steps.

With the exit of BRK from the European market, almost the only alternative remaining to customers needing to replace any BRK alarms is to replace their entire system with another from different manufacturer. The bases cannot be reused as described above but a suitable replacement system will be able to use the existing mains power wiring and the interlink wiring that sets off all other alarms when one detects fire. An electrician is required for safe replacement of the bases but at least there will be no need to lay new wiring around your property.

All mains powered smoke and heat alarms should have a backup battery to power them in case of a loss of electrical supply. Within each of the 600 and 700 series there was a choice between a replaceable 9 Volt battery (denoted by “MBX”, e.g. the 660MBX optical smoke alarm) or a sealed, rechargeable lithium battery (denoted by “MRL”, e.g. the 790MRL heat alarm). The difference between the 600 and 700 series was the base itself – 600 series alarms had a hanging plug for manual connection and a twist-fit base, whereas 700 series alarms had a push-fit base which connected as the alarm was mounted. The alarm heads were in fact exactly the same between the two series.

Fortunately, there are several other well established and trusted manufacturers of fire detection and alarm equipment. While one hard-wired domestic fire alarm system can be replaced with almost any other, we have carefully examined the aspects of the BRK alarms that made them so popular. For similar performance, lifespan, features and battery back-up we recommend the following replacements:

Your new alarms come with the new bases, detector/alarm heads, fixings, and installation & operation instructions. Alarms with replaceable backup batteries are supplied with the first one included, typically a 9V battery. If you want to take the opportunity to upgrade from alkaline to lithium, this is the ideal chance. Naturally a longlife battery system costs more but the benefits include the yearly savings on replacing alkaline batteries, the safety of not having to stand on a chair to do so, and the elimination of the frustration with the 3am “chirping alarm” warning you of low batteries. The wiring for each type of system is the same, so you can upgrade with confidence.

A quick note on safe practice when changing detectors heads

A continuous green light on the unit indicates your alarm is receiving mains power. This light allows you to easily tell when the mains power has been isolated. Always make sure to check the green LED is on prior to switching the fuse off. Checking the status of the green light before and after turning off the power allows you to confirm that the power supply has been successfully cut from the alarm base before you attempt to remove the alarm head.

CAUTION! If your alarms are interlinked, or interconnected, via a wire (i.e. not using the DS700RF wireless base) such that testing one alarm causes all alarms to sound, then care must be taken to ensure all mains power circuits which supply the alarms are turned off at the fuse. While it is recommended to install mains powered alarms onto a single, dedicated power circuit this is often not possible where the alarms are fitted in an existing property which did not previously have mains powered alarms. In these cases it is likely that each alarm is powered from a nearby power circuit that already existed, connected to different fuses, and the interlink wire can carry a live electric current to the other alarms around the building.

You may also notice a red light flashing roughly every 45 seconds on your alarm. Don't worry, this doesn't indicate a problem. This periodic flash simply indicates that the alarm has performed a self-test cycle and is a standard feature on these smoke alarms.

Reviewed: 15/02/2022 (doc:313 V1.2). Our articles are reviewed regularly. However, any changes made to standards or legislation following the review date will not have been considered. Please note that we provide abridged, easy-to-understand guidance. To make detailed decisions about your fire safety provisions, you might require further advice or need to consult the full standards and legislation.