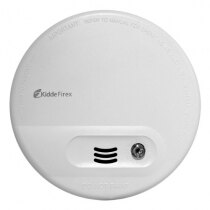 Kidde Firex KF1 and KF1R's are mains powered, interlinks ionisation smoke alarms. The KF1 has an alkaline battery back-up and the KF1R, a rechargeable lithium battery back-up. The units are hard wired and can be interlinked with other units from the series to create all round fire protection within the home.


Please Note: The Kidde Firex KF1 (previously 4870) and KF1R (previously 4881) are replacements for the Kidde 1239HI, 1275H, 1275, Kidde i240C / 1240C and 1239HILLs and can be interlinked. However, the new models cannot be used on the old base plates and use different connector blocks. This means that base plates must be swapped over and connectors need to be replaced.

The table below shows all the units that can interlink with the KEKF1 and KEKF1R.

Q. I purchased 4 alarms for my property recently via Safelinc's website. My electrician has installed them over the weekend.

However we have the following issue:

When you press the test button on the Carbon monoxide alarm the carbon monxide alarm goes off (but no alarm sound is heard on the other 3 connected smoke alarms).

This seems strange given that when you test any of the 3 smoke alarms, an alarm sound can be heard on the carbon monoxide alarm.

The alarm models are:

The reason is the relevant British Standard which requires a different alarm sound for CO alarms in comparison to smoke alarms.

To achieve this, the CO alarm in question has a dual sound capability, meaning that

- if the CO alarm is tested or triggered, only the CO alarm sounds (sounding like a CO alarm). The smoke alarms are in this case not allowed to sound. As said above, this is a stipulation from BSI

24 customers have given this product an overall rating of 4.7 out of 5

Ideal replacement for my old alarms

It worked perfectly with the existing system and smoke alarm. Easy to fit too

All good thanks.Would do business with you again

Still alive Easy to install and I've not died in a fiery blaze. Can't find fault.

Works well, keeps us safe We replaced an old set of these with new. The old and the new are the same size so easy to fit in which is a benefit. The old system worked well with few false alarms and the only alarms were when you would expect it. Luckily we've had no fires so it hasn't been tested in anger, but when the plumber was soldering that set it off so seems to work!

Product delivered with slight delay, as advised to me due stock situation New design fitted easily into base plate of previous model. Tested it and my two linked, original units chimed in as before. My second experience of purchasing from Safelincs.

Good apart from plugs giving trouble Good apart from one thing. The units are fitted in a let property and it is a requirement that the tenants should replace the batteries when required. It is necessary to remove the interconnect plugs to do this. It is not possible for an inexperienced person to get the plugs out without doing some damage. They are a very tight fit and I had to use a small screwdriver to lever the plastic lugs apart and then withdraw the plug. This was not the case with the old ones which had been in use some 10 tears. 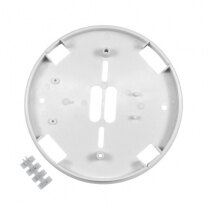