Fire Prevention in the Home

Every year, more than 37,000 household fires are reported in the UK and more than 260 people die in these fires. A further 7,300 are injured. One in ten of these fire victims are children. However, fire safety is not an issue that comes to our minds very often as we go about our daily routine. Yet in our homes, there may be dangers that can take lives and destroy our properties.

This web site wants to highlight the dangers of fire and smoke.

Most residential fire deaths occur because of inhalation of toxic gas, rather than contact with flames. The tragedy is that many of these deaths could be prevented by taking a few precautions.

The most obvious way out may be blocked by fire or smoke. Remember that the smoke of a home fire is extremely dense and toxic - it is virtually impossible to see through - so if a downstairs room is on fire, a window will usually be the only way out of a room upstairs. 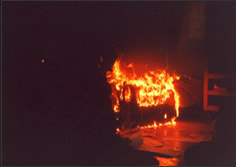 Please note that your anticipated escape route, for example over a bay window or similar, might well be blocked if the fire rages in the room below. 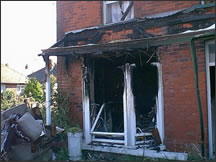 The photo shows a house where the fire had come through a little roof, which otherwise could have acted as an escape route. Here, an alternative exit would have been required.

If you are exiting with young children, the parent to which the children are most attached should lead the way, as children will be more likely to follow.
Establish a meeting place outside your home to be sure everyone has escaped. Every family member should participate in practice escape drills.

The earlier a fire is detected, the less risk there is to your life. Fire alarms and smoke detectors play a very important role in this

You are four times more likely to die in a fire if you don't have a smoke alarm that works.

Extinguishers are classified according to the class of fire for which they are suitable. There are several different classes of fires: A, B, C, D, F and Electrical.

Class A fires involve common combustibles such as wood, paper, cloth, rubber, trash and most plastics. They are common in typical commercial and home settings.

Class B fires involving flammable liquids, solvents, oil, petrol, paints, lacquers, other oil-based products and liquifying plastics. Class B fires often spread rapidly. Unless they are properly suppressed, they can re-flash after the flames have been extinguished.

Electrical fires are those which involve or a started by an electrical device or source (sometimes, but not officially, referred to as Class E).

A typical home extinguisher should ideally have an ABC rating. However, the most common type of extinguisher that provides covers all three classes, the dry powder extinguisher, is not recommended for use indoors due to the mess it creates. Furthermore, your fire extinguisher in the kitchen ought to be suitable for pan fires as well (typically only a feature of wet chemical extinguishers).

Arson is a serious problem, as each year around 80,000 arson attacks are committed. Hundreds of people are injured and dozens of people die. The associated cost of arson attacks is over £2.5 billion annually. Arson now accounts for around half of all recorded fires in the UK. The letterbox is the most vulnerable area of a building, providing an arsonist direct and easy access. We therefore recommend the installation of an Anti-Arson Letterbox on the inside of the door containing the letter opening.
Anti-Arson letterboxes are designed to eliminate the threat of arson by firstly containing any flammable liquid poured through the letterbox. The fire is then automatically extinguished by a heat sensitive automatic fire extinguishing system, which is heat-activated.

The majority of people should now have a smoke alarm in their home, but whether they are correctly positioned and working is another story all together. Another extremely important means of protection in the home against fire is commonly overlooked: the fire door. Fire can rapidly spread and can possibly engulf the rooms in a house in under 10 minutes, destroying the property and belongings.

Damage caused by a fire and the smoke from a fire can be radically reduced by having fire doors fitted in the home and closing them at night when fires are most common. In the event of a fire, the fire door will hold back the smoke, heat and flames, protecting the escape route and allowing the occupants more time to get out of the building safely as well as localising the smoke and fire damage to the room.

Restraining the fire to a smaller area also means that Fire Fighters can utilise the most important, initial moments when they first arrive at a fire to hit the fire and ventilate the room promoting damage control.

Commercial properties have certain fire regulations that protect against fire but owners of domestic properties ought to ensure that they are protected in this way by having the correct fire doors and fire door hardware installed. This will include the door hinges, door frames and seals.

If you are looking for a fire door why not take a look at our Online Fire Door Configurator.


Reviewed: 23/07/2019 (doc:134 V1.1). Our articles are reviewed regularly. However, any changes made to standards or legislation following the review date will not have been considered. Please note that we provide abridged, easy-to-understand guidance. To make detailed decisions about your fire safety provisions, you might require further advice or need to consult the full standards and legislation.