Have you ever worked in or visited a building with a confusing mixture of fire exit signs?

In fairness, most of us have little reason to notice the style of the fire exit signs surrounding us. Nevertheless, in the event of a fire, we would expect the guidance on how to escape to be consistent and clear. This expectation is emphasised by the following quote from BS 5499-4:2013: "To avoid confusion, all signs within a system of escape route signing should be of similar style, design, size and format." BS 5499-4:2013 Safety signs. Code of practice for escape route signage.

Whilst that may sound like a sensible requirement, the water is unfortunately muddied by the existence of different styles of fire exit signage, and a lack of consensus amongst those specifying them as to which style is 'correct'.

There are several documents giving guidance on the way fire exit signage should be managed. Most people in a position of authority relating to fire safety will have heard of the Regulatory Reform (Fire Safety) Order 2005 (or RRFSO), as this is the legally binding guidance when it comes to fire safety in non-domestic premises. The RRFSO includes the following, succinct requirement in relation to emergency exit signs: "Emergency routes and exits must be indicated by signs" RRFSO Section 14 (2) (g).

Therefore at this level, whilst there is a requirement to provide signage, the recommended design of the signs is not determined. There is, however, a range of advisory standards which define the design and placement of fire exit signs:

For the purpose of discussing the relevance of the documents listed above, it is important to explain the prefixes in their titles. BS stands for British Standard, EN stands for European Norm (i.e. European Standard) and ISO stands for International Organisation for Standardisation (i.e. International Standard). Confusion can arise as some have a combination of the acronyms as a prefix!

The simplest way to absorb this information is to consider the letters used before the numerical values as implying layers of adoption. In most cases a document carrying the ISO tag will have begun life as an international standard - developed for use within the 162 member countries of that organisation. These standards can then be adopted by regional or local standards bodies (or both), and that in turn can lead to the situation where a document carries all three sets of initials such as BS EN ISO 7010.

With that information in hand, we can now move on to discuss the specific question of "Which fire exit signs should I use?" All of the above standards are advisory in nature, or a recommendation for best practice. They are not in themselves laws, but are an acceptable standard within a legal context. To fully address this question, we need to consider the laws concerned.

The origin of much of the uncertainty regarding fire exit signs began with the EEC Directive: 92/58/EEC. This directive, released in mid-1992, introduced a duty "on the minimum requirements for the provision of safety and/or health signs at work". Annex II of this document offered graphical examples of the signs required, along with a written requirement for emergency escape signs to be "rectangular or square shape" and feature a "white pictogram on a green background (the green part to take up at least 50% of the area of the sign)".

This directive was then effectively transferred into British legislation with the creation of The Health and Safety (Safety Signs and Signals) Regulations 1996. This is the specific piece of legislation dealing with the provision of fire exit signs and is enforceable by the HSE. This legislation exists in partnership with the Regulatory Reform (fire safety) Order 2005, with both imparting a duty to provide fire exit signs. The specification found in the H+S Regulations includes a requirement for the sign to be: "rectangular or square in shape" and feature a "white pictogram on a green background (the green part to take up at least 50% of the area of the sign)". The document then offers a range of examples complying either with BS EN ISO 7010 or the EEC Directive, a tolerant approach!

So, after all of that, are we any closer to understanding which fire exit signs are and are not compliant? We are nearly there. A crucial resource is knowledge of the timings of the introduction of the many pieces of legislation, and an understanding of the difference between the old BS 5499, the new BS 5499-4 & BS 5499-10 and BS EN ISO 7010:2012+A7:2017.

BS EN ISO 7010:2012+A7:2017 was published in August of 2011. The introduction of this international standard created a potential contradiction with some sections of the already existing BS 5499 family of standards. As such, parts 1, 5, 6 and 11 of BS 5499 were withdrawn, and parts 4 and 10 were rewritten to work in harmony with the new international standard.

Therefore, all of the existing standards, whether British, European or International in origin, are currently aligned so that all of the information within is consistent and harmonious.

Indeed, BS EN ISO 7010 began life as an international standard in 2003, meaning manufacturers had over ten years to anticipate its adoption at the European and British levels. As a result of this, manufacturers had time to ensure that their signs were futureproof, and therefore minimised the difficulty of transitioning to the International Standard.

Therefore, we can draw the following conclusions:

The general consensus is that it matters less which sign is chosen than that they are consistent within a building.

With all of that information to hand, let's explore the design of both the "European" and "British" style signs and highlight the key differences between the two versions. 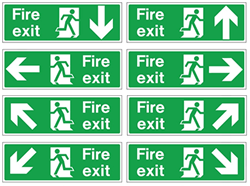 British format signs are identifiable by the graphic representing a person running through a doorway. This sign is made up of three segments - the text, the symbol and the arrow. The arrow indicating direction is bolder than on the European signs. 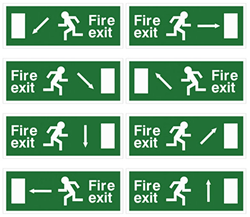 European format signs are identifiable by the separation of the symbols for the person escaping and the doorway. This sign is made up of four segments - the text, the person symbol, the door symbol and the arrow. The arrow indicating direction is notably less bold than on the British standard signs.

The question posed at the start of the article was: Have you ever worked in or visited a building with a confusing mixture of fire exit signs?

If the answer is yes, then the likelihood is that the person managing the building you visited is failing to fulfil their fire safety duties. If that person is you, then now is the time to refresh and standardise your fire exit signs. New fire exit signs are available for less than £5 each. They will not only make sure you comply with the relevant guidance, but will also ensure that people fleeing a building in an emergency are able to do so by following the reassuringly familiar guidance signs.

To purchase fire exit signs, or for further advice contact our customer support team on 0800 612 6537 or via support@safelincs.co.uk.


Reviewed: 10/04/2019 (doc:65 V1.1). Our articles are reviewed regularly. However, any changes made to standards or legislation following the review date will not have been considered. Please note that we provide abridged, easy-to-understand guidance. To make detailed decisions about your fire safety provisions, you might require further advice or need to consult the full standards and legislation.