Every year out-of-hospital ventricular fibrillation cardiac arrests kill hundreds of thousands of people worldwide, often striking those without obvious high-risk conditions or symptoms. The fundamental strategy to improve survival is to reduce the time interval from collapse to defibrillation, as the likelihood of survival decreases on average about 5-10% for each minute that elapses without defibrillator treatment. The traditional deployment model is to equip specific emergency medical services (EMS) professionals, who are activated to respond with a defibrillator and deliver the potentially life-saving shock.

In most communities, the average interval from the emergency call to EMS defibrillator care exceeds eight minutes, an interval that results in less than a quarter of patients surviving. In many communities the survival rate is in the single digits. Early bystander cardiopulmonary resuscitation, expert EMS care and comprehensive hospital management have an integral life-saving role, but the effectiveness of these is undermined by delays in defibrillation.

Now, a study carried out in Hampshire by the University of Southampton and the South Central Ambulance Service, published in the online journal Heart, has found that the restricted availability of defibrillators and poor understanding of how to use them contributes to an increase in the number of deaths from cardiac arrests occurring outside hospitals. This is despite several campaigns to increase the numbers of these life-saving devices in public places, and the acknowledgement of the importance of their role in the UK Government's Cardiovascular Disease Outcomes Strategy, published in March 2013. 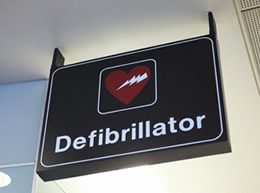 In this strategy it stated that many more lives could be saved with improved and earlier cardiopulmonary resuscitation (CPR), and the public could be better informed and trained about what to do when they witness a cardiac arrest or someone with symptoms suggesting a heart attack. Bystander CPR doubles survival rates and yet is attempted in only 20-30% of cases. There is scope for all emergency service personnel to be trained in CPR, and for basic life support skills to be more widely taught, perhaps as part of volunteering programmes in schools and in the workplace.

The strategy goes on to state that wider availability of automatic external defibrillators (AEDs) could also save additional lives. It sets out plans for The NHS Commissioning Board (CB) to work with the Resuscitation Council, the British Heart Foundation and others to promote AED site mapping/registration and first responder programmes by ambulance services, and consider ways of increasing the numbers trained in CPR and using AEDs.

For the study, a retrospective review of all patients with out-of-hospital (OOH) cardiac arrest attended by South Central Ambulance Service (SCAS) in the county of Hampshire, during a one-year period (1 September 2011 to 31 August 2012) was undertaken. Emergency calls were reviewed to establish the known presence of a Public Access Defibrillation (PAD). Additionally, a review of all known PAD locations in Hampshire was undertaken, together with a survey of public areas where a PAD may be expected to be located.

The current population of Hampshire is estimated to be 1.76 million. During the study period, 673 known PADs were located in 278 locations across the county. Of all emergency calls confirmed as cardiac arrest (1035), the caller reported access to an automated external defibrillator (AED) on 44 occasions (4.25%), successfully retrieving and using the AED before arrival of the ambulance on only 18 occasions (1.74%).

The research found that, despite several campaigns to raise public awareness and make Public Access Defibrillation more available, many public areas have no recorded automated external defibrillator (AED) available, and in those where an AED was available it was only used in a minority of cases by members of the public before arrival of the ambulance. Overall, Public Access Defibrillation was only deployed successfully in 1.74% OOH cardiac arrests. This weak link in the chain of survival contributes to the poor survival rate from OOH cardiac arrest and needs strengthening.

Professor Charles Deakin, of the NIHR Southampton Respiratory Biomedical Research Unit, University of Southampton, also a consultant in Cardiac Anaesthesia and Intensive Care at Southampton General Hospital, was one of the leaders of the study.

He comments: "Survival from the 30,000 annual cardiac arrests where resuscitation is attempted remains disappointingly poor, with survival rates of only seven per cent. Bystander CPR and early defibrillation with public access defibrillators have the potential to increase survival three-fold and we were therefore interested to see how often this intervention was available to patients prior to ambulance arrival."

"Despite efforts by the Department of Health and the British Heart Foundation to promote and distribute PADs, together with additional PADs made available by community groups, we found that many key locations remain devoid of a PAD, such as GP surgeries, railway stations, gyms. A PAD was available in only four per cent of confirmed cardiac arrests and even then, only half of these patients had a PAD successfully attached. The lack of PADs, knowledge of their location and confidence to use them is significantly limiting the successful resuscitation of patients suffering out-of-hospital cardiac arrest. More needs to be done to strengthen these early links in the chain of survival."

External defibrillators can be used to shock an arrested heart back into rhythm before the arrival of an ambulance. They don't require any specialist expertise, and can be used by anyone - which is particularly important, as the evidence shows they can triple the chances of survival.

Professor Deakin and his research colleagues acknowledge that they did not investigate the availability of public defibrillators across the UK, but suggest that their findings "would probably be similar elsewhere."

Reviewed: 25/01/2022 (doc:96 V1.0). Our articles are reviewed regularly. However, any changes made to standards or legislation following the review date will not have been considered. Please note that we provide abridged, easy-to-understand guidance. To make detailed decisions about your fire safety provisions, you might require further advice or need to consult the full standards and legislation.