Sash windows are traditionally found in Georgian or Victorian houses and are made up of one or more moving panels. The name "sash" is given almost exclusively to windows were the panels slide over one another either vertically, or horizontally.

A luminaire or sign providing Maintained or Non-Maintained emergency lighting, in which all the elements such as battery, the lamp and the control unit are contained within the housing or within 1 metre of the housing.

An emergency luminaire without its own batteries, which is designed to work in conjunction with a central battery system.

A smoke alarm is a device that detects smoke which is typically an indicator of fire.

The PIR motion sensor built into the SpeechPOD detects the presence of people and activates a pre-programmed voice warning.

The dual sensor models of the SpeechPOD can issue two different voice messages depending on the direction from which they detect movement.

The SpeechPOD feature of the SD Evolution range is a PIR (passive infrared) sensor activated voice messaging system. Upon detection of movement the SpeechPOD will play a pre-programmed audio clip.

Stair nosing is a photoluminescent (glow in the dark) floor covering which is specifically designed to be applied to the edge of each step to help identify the stair edges and and highlight the escape route.

The part of emergency lighting which may be provided to enable normal activities to continue in the event of a mains supply failure.

The steel security plate is a solid piece of steel that is used to fill the aperture of the letterbox when not in use. With the addition of a locking screw to secure the security plate, the ability to pass things through it is disabled. By locking the plate closed, unwanted items can not be pushed through the door, further reducing the risk of an arson attack. 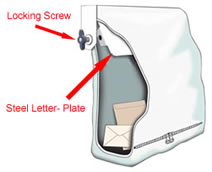 An emergency light unit that can be wired to a switch, allowing it to be turned on or off for regular use (switching the unit between maintained and non-maintained operation). In the event of a mains power / circuit failure the lamp on the unit will be powered by its back-up battery.