Automated external defibrillators (AEDs) - A guide to their purpose, design and maintenance

Sudden cardiac arrest (SCA) is a condition in which the heart either stops abruptly or loses its regular beat; the British Heart Foundation (BHF) advises that, when someone suffers an SCA, their chance of survival drops by up to 10 per cent for every minute that passes. Speed is therefore crucial in responding to such an event and, with seven out of ten SCAs occurring outside hospital, it is more likely to be a lay person, for example a work colleague or a passer-by, rather than a medical professional who is first on the scene. According to the BHF, performing cardiopulmonary resuscitation (CPR) can double the casualty,s chance of survival, while having an automated external defibrillator (AED) to hand can further increase this chance, by more than a third. This is a significant statistic, bearing in mind that in the UK around 60,000 people each year sustain cardiac arrest outside the hospital environment and require emergency treatment (Resuscitation Council, UK).

Such is the importance of defibrillators that some 10 years ago the British government initiated a scheme whereby AEDs would be made widely accessible in densely populated public areas such as railway and tube stations, bus terminals, airports, shopping malls, sports halls / swimming pools and football stadiums. The project was entitled "Defibrillators in public places: the introduction of a national scheme for public access defibrillation in England" and was implemented as the National Defibrillator Programme. Since 2007, the Programme has been co-ordinated by the British Heart Foundation, which has overseen the installation of around 10,000 AEDs to date in a variety of public locations, all available for community use. In the words of the BHF: "The British Heart Foundation, together with the Department of Health, the Resuscitation Council (UK) and the voluntary societies are very keen to have AEDs available in places where people often collapse or where large crowds gather". The voluntary societies that promote the use of defibrillators include, inter alia, the British Red Cross, St John Ambulance and the drowning prevention charity, the Royal Life Saving Society UK.

There is no doubt at all about the significance of automated external defibrillators and their lifesaving potential, but what exactly are they, and how do they work?

Although there are several models of AED on the market today, they are all designed to perform the same, basic functions: i) to analyse the cardiac rhythm (heartbeat) of the casualty; and ii) deliver, where the analysis so determines, an electric shock to the heart, via a pair of electrodes applied externally to the chest, to interrupt the fibrillation and restore normal, regular heartbeats. Semi-automatic AEDs indicate the need for a shock, which must then be administered by the rescuer, in accordance with audio / visual prompts; fully automatic AEDs administer the shock without the need for rescuer intervention. 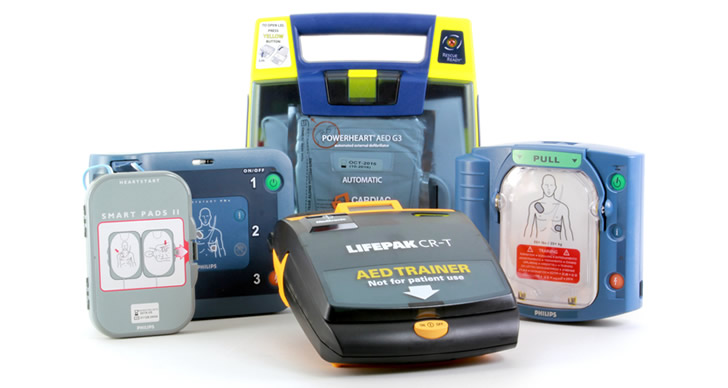 At this point, it is may perhaps be helpful to explain what 'fibrillation', means. In most cases of cardiac arrest, the heart does not stop completely. Instead, its electrical activity becomes disrupted, with the individual fibres of the heart contracting in an abnormal, chaotic way, the medical term for which is 'ventricular fibrillation, (VF). The heart can no longer pump blood around the body and, as a result, the brain and other vital organs quickly become starved of oxygen and start to fail. A similar scenario arises from ventricular tachycardia (VT), when the heartbeat becomes dangerously fast; the Resuscitation Council (UK) advises that use of an AED in cases of VT is also appropriate (see extract below). In both cases, the casualty will be unconscious and not breathing normally, if at all.

The shock delivered by an AED causes the heart fibres to contract together (defibrillation) rather than individually. This serves to restore the normal rhythm and pumping action of the heart, and therefore blood circulation, in conjunction with cardiopulmonary resuscitation (CPR), an intensive technique that involves a specific number and rate of chest compressions, interspersed with rescue breaths, over a prescribed length of time. As noted above, early response is critical in cases of SCA; the BHF notes that this should be within four minutes of the casualty,s initial collapse in order to maximise their chances of survival. In respect of its AED guidelines, the Resuscitation Council (UK) "recommends strongly a policy of attempting defibrillation with the minimum of delay in victims of VF / VT cardiac arrest". It goes on to state that some of the ILCOR Consensus on Science and Treatment Recommendations are also relevant, including the recommendation that: "When using an AED minimise interruptions in chest compression. Do not stop to check the victim or discontinue CPR unless the victim starts to show signs of regaining consciousness, such as coughing, opening his eyes, speaking, or moving purposefully AND starts to breathe normally" (RC (UK), 2010 Resuscitation Guidelines, pp 29, 30).

It is clear that CPR is integral to the resuscitation process and this is a significant factor when deciding on the most appropriate type of AED to install in your premises. Some makes / models assume a certain level of relevant expertise in the user while others are geared more to the lay person with little or no knowledge of first aid.

The basic AED unit is a portable device, weighing around 2.5 kg (5.5 lb), including batteries and self-adhesive pads. The latter contain the electrodes, which conduct the current. They come in sealed packs, are single use, and should be affixed to the casualty,s chest in accordance with the pack,s illustrations; typically left and right, although some AEDs feature electrodes that are non-polarized (i.e. interchangeable pad positions). Once in place, they should not be removed - even if, in the heat of the moment, they get mixed up. Reassuringly, the Resuscitation Council (UK) advises that: "Although most AED pads are labelled left and right, or carry a picture of their correct placement, it does not matter if their positions are reversed" (ibid, p 33).

Current Resuscitation Guidelines state that standard AED pads are suitable for use in children over 8 years old, while special paediatric pads should be used in children aged between 1 and 8 years. It is not recommended that an AED be used on children under 12 months.

By their very nature as an emergency resuscitation device, AEDs feature the minimum of controls, to make them as simple to deploy as possible. The voice / visual prompts are key in guiding rescuers. These prompts typically include "attach pads to patient,s bare chest"; "analysing"; "shock advised"; "do not touch patient"; "press flashing shock button" (in the case of semi-automatic devices); "shock delivered"; "start CPR". The instruction not to touch the patient when the shock is administered is to ensure that no-one else receives a jolt.

The integrated computer technology of an AED is also designed to automatically record electrocardiogram (ECG) and event data; some models, such as the Cardiac Science Powerheart AED G3 Plus, can record multiple sessions of in total 60 minutes duration, while others require the data to be downloaded after each event, to avoid memory override.

Owing to the nature of the SCA resuscitation process, a comprehensive responder kit is important. This type of pack is supplied with many AEDs and contains a range of products including nitrile gloves (essential first-aid equipment); strong scissors (should it be necessary to cut the patient,s clothing); razor (so that any chest hair can be shaved prior to pad placement); wipes (to cleanse the patient,s chest if necessary before placing the pads); tissues / paper towels (to dry the patient,s chest in wet conditions, before placing the pads); face mask / shield (for use when administering rescue breaths); and a heat retaining foil blanket (to keep the patient warm).

AEDs are sophisticated, computerised devices that incorporate a range of automatic self-test functions. These include, inter alia, the self-testing of batteries, internal electronics, pads (presence and function), software and charging, undertaken on a daily, weekly or monthly basis as appropriate and according to manufacturer specifications. This does not preclude the need for regular visual inspection, however, as physical intervention will be required when, for example, a prompt to change the batteries is issued, the self-test fails and a manual test has to be performed, or the status indicator window displays the 'off, sign when the unit is actually switched on.

Furthermore, although a basic AED unit has no shelf life, its batteries and disposable pads do. Batteries are typically non-rechargeable and should be replaced every 3-4 years or according to manufacturer specifications. All batteries should be removed from the compartment and discarded, before new batteries are installed; old and new batteries should never be mixed. The disposable, self-adhesive pads also have a shelf life, to a maximum of 2 years. When purchasing pads, it is therefore important to check the remaining lifespan of the pads being sold, as not all retailers monitor the age of their stock.

It is crucial that all parts and functions of an AED are closely and continually monitored as failure to maintain a unit can make the difference between life and death. Out of date batteries and / or pads, software malfunctions and failure to download data from the memory can all contribute to the failure of an AED at the critical moment, thereby compromising the SCA sufferer,s chances of survival.


Reviewed: 18/12/2018 (doc:93 V1.0). Our articles are reviewed regularly. However, any changes made to standards or legislation following the review date will not have been considered. Please note that we provide abridged, easy-to-understand guidance. To make detailed decisions about your fire safety provisions, you might require further advice or need to consult the full standards and legislation.