Portable fire extinguishers in refineries and forecourts are exposed to weather and extreme temperatures and, on top of heavy handling, sometimes face a corrosive atmosphere. Traditional fire extinguishers, made from painted steel with an inner protective lining can corrode, often get dented, burst if the contents freeze and can experience detachment of the inner protective lining. All of these issues will lead to the extinguisher being condemned at the annual extinguisher service, resulting in you having to replace it.

This leaves the owners with replacement costs on top of the annual servicing charges, refilling charges every five years and the problem of supervising external subcontractors onsite. In larger refineries and production facilities the cost for supervision of every sub-contract engineer and issuing safety instructions can be significant.

Britannia, a long established manufacturer of portable extinguishers in the UK, in partnership with Safelincs can offer a solution which addresses all these issues. 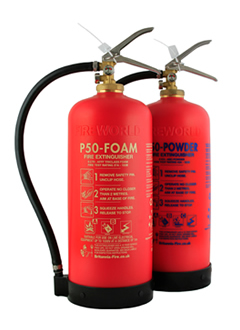 To test their resilience at the production plant, every 500th extinguisher is destruction tested: The extinguishers are pressurised 12000 times between zero and 25 bar. After this demanding test they are crushed flat by a metal blade and re-pressurised to over 55 bar without being allowed to burst or leak! In the tests P50 extinguishers actually only burst at around 85 bar!

These extinguishers are corrosion-proof and have a far superior pressure resistance than steel extinguishers. As the chemicals are not reacting with the cylinder, there is no need to refill the extinguisher after five years. The manufacturers of the chemicals have certified that the chemicals used in the P50 extinguishers will not require refilling for at least ten years. After the ten years, Safelincs, the main distribution partner of Britannia, offers an exchange service. The returned units are re-filled and can then be used for a further ten years! 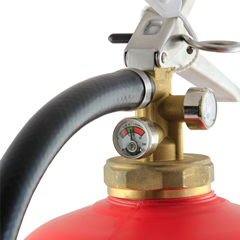 The P50 extinguishers are kitemarked and LPCB approved. They are also CE marked and marine approved. All major insurance companies accept the reduced servicing regime, as long as evidence of the regular visual inspection is kept in the standard fire safety log books in the same way as for any other extinguisher types. Britannia offers a ten year guarantee for all P50 extinguishers, offering complete peace of mind.

P50 extinguishers are installed in refineries, petrol stations and many other outdoor locations. It was in one of the refineries that the extinguisher shown below was photographed after it had been run over by a van – it was still fully pressurised!

These composite extinguishers cost in the region of £100-£150, depending from order volume, including site survey, installation, training and certification. They save the customer the costs of the annual service and the five-yearly refills/replacement. Due to the refurbishment after ten years (at around half the price of a new P50) the lifespan of the extinguisher is twenty years.

A simple and conservative calculation, comparing it with Safelincs’ own and very competitive standard extinguisher range, identifies the savings. We have only considered a ten year period, although the savings over 20 years are of course much larger: The savings indicated below are per unit.

As mentioned above, the real savings are higher when a 20 year period is considered. Larger customers are also achieving much better purchase prices in the first place.

The P50s have more than double the A rating, allowing drastic reduction of numbers in offices and work places.

The P50 foam is also suitable for use on electrical equipment, allowing the replacement of the CO2 extinguishers found in many locations. Traditional foam extinguishers often do not have that capability!

To help our customers with the cost of the introduction of the P50 extinguishers, we offer additional options:

We will, of course, also remove your old extinguishers free of charge and dispose of them responsibly. 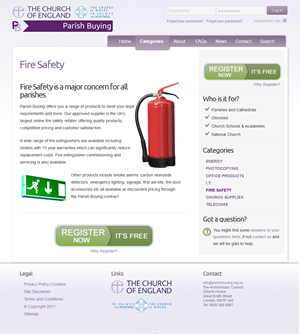 Safelincs are the contracted fire safety and H&S provider of the Church of England and the Church in Wales through their collaborative buying platform ParishBuying. We provide all fire safety products and services required in Churches, church schools, parishes, church buildings and offices as well as general H&S products such as first aid, PPE and winter safety products. Generous discounts for all Church organisations have been negotiated on top of the already competitive Safelincs internet prices.

The Church of England and the Church in Wales recently asked all their members about feedback about their service providers and Safelincs came out with the highest possible rating. Customers commented that Safelincs are ‘extremely helpful’, satisfied their needs entirely and that the service was ‘excellent’.

We are of course very proud about this feedback which has strengthened our philosophy of providing a personal service and best support on a nationwide scale.

The findings of the survey match the findings of our independent third-party ratingprovider, Trustpilot, which confirms our ‘excellent’ rating.